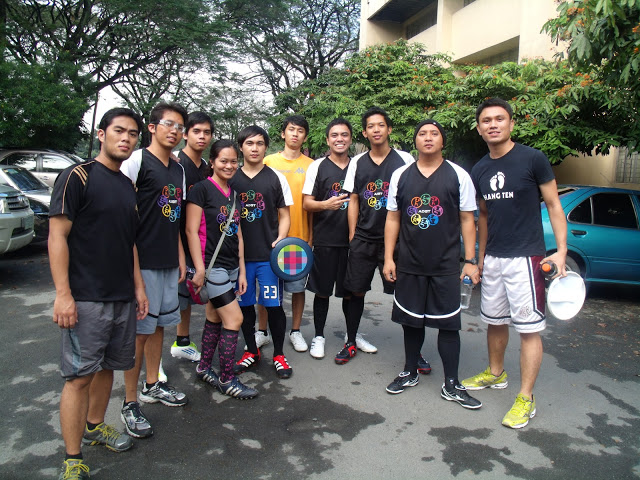 This post was due weeks ago, but I’m just a slacker.

Anyway, last December 11, my officemates who are frisbee addicts and I decided to take our love for the disc to another level. We signed up for an Ultimate tourney, Catch which was made possible by the UP Engineering Radio Guild (UP ERG). It’s a yearly tournament held by the organization. Good thing somebody stumbled about this announcement here.

So, here’s us before the game. Not all of us though. Some were busy preparing their stuff, securing our things, etc.

We called ourselves ADIKs for some specific reasons. We’re 14 all in all — 11 gents and 3 ladies. Too bad O can’t make it. Said she can walk, she can hop, but she can’t run. 🙁
And zoom this! 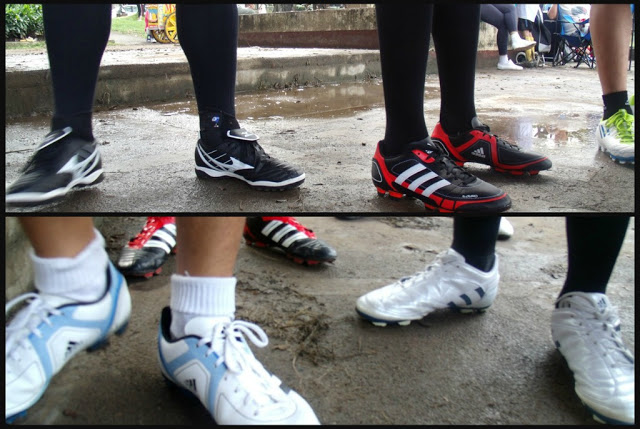 Yes, they were all wearing studs, football studs, but since we are using them for the ultimate frisbee game, then we shall call them Frisbee cleats. Get it? Days before the game, rain was pouring hard all over the metro. And for the big day, we were all praying that He’d make the sun show instead of sending rain. Mister Sun showed up all right, but only for a while. And it was no use. The field was all muddy. Thank goodness I borrowed studs! Yay! 🙂 I couldn’t have run on the UP Fields wearing ordinary sneakers. My new shoes would’ve aged fast, so I was really happy that I have produced studs for myself. Aha. 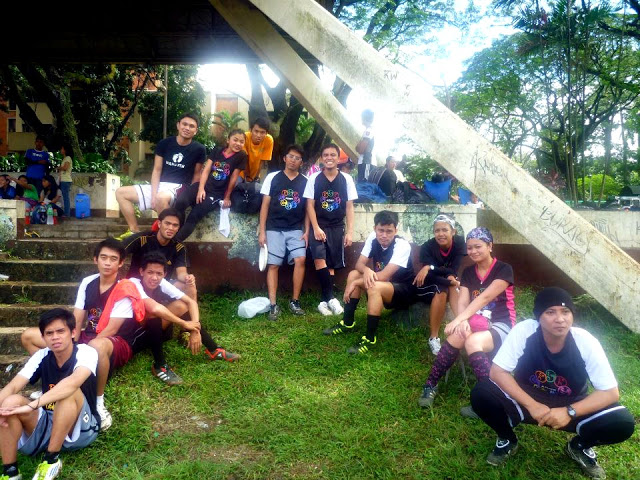 A shot before the game. We were observing at our possible opponents. Know their capacities and take note of their plays. (As if). This was right after we shared over the sunscreen that I brought with me. Yes, it served the entire team. Can you spot me? Fully geared, huh? Haha. I even had a color theme — pink and black and grey. Lol. And I wear earrings and my necklace while playing. Can’t without them. 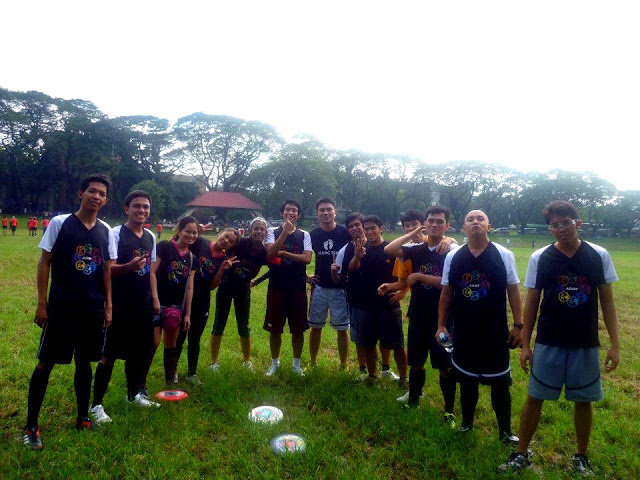 Picture picture before the game. We soooo excited! Especially me. Haha. I’m not sporty, so imagine the feelings that I have when I learnt that I was about to play my first ever tourney. First ever in my whole life! 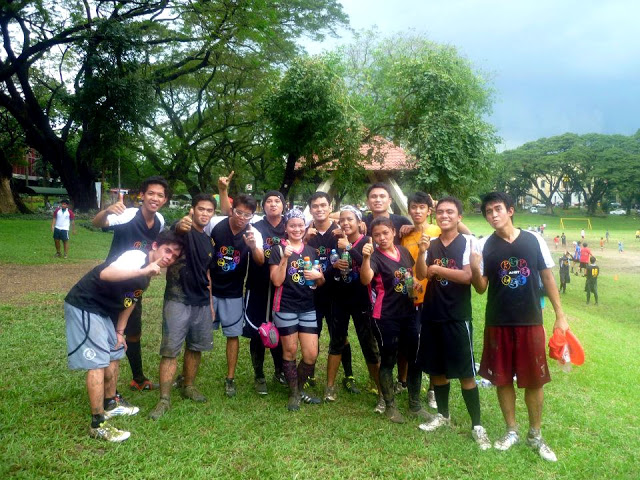 Victory shot! Woohoo! First game, first win! And mud already covered our socks and shoes. A little mud, sweat and sun can be good sometimes. Look at our pride smiles! 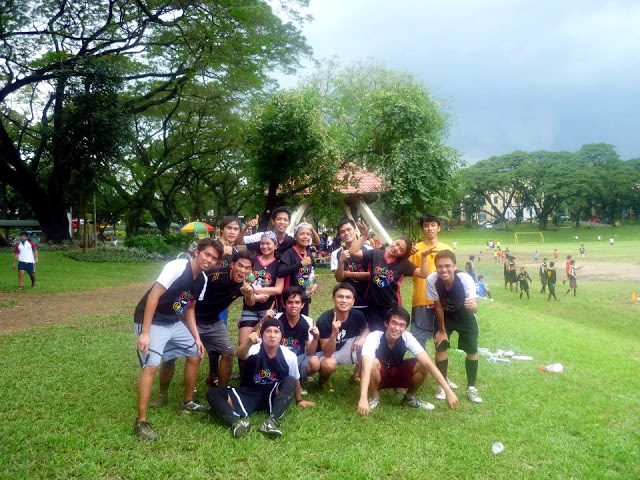 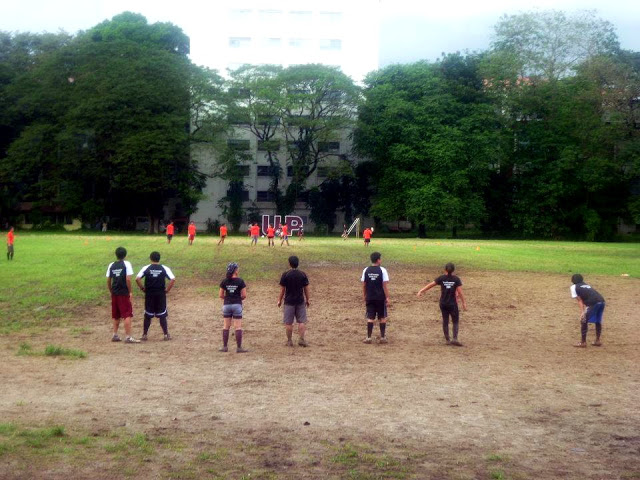 Our second game. The opponents agreed on the 5-2 split up (5 gents and 2 ladies), which was good so that one of the girls can rest for a while. We fought against some UP team who were so effing good. The start was great, but they change the entire line up every after two points that they accumulate. So, they always have fresh legs. We didn’t have a game plan, so there. I guess you know who won. (I am fattttt. 🙁 ) 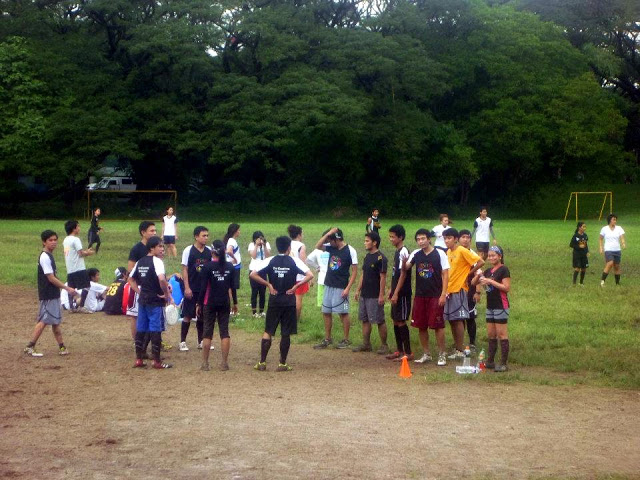 In this shot, I’m on the bench, but there’s no bench. Haha. (My humor sucks, eh?) If you’ll zoom in, you’ll see that I’m smiling at the camera. I, who took the shot, was not able to join the tourney because he has Saturday classes. But he was there to give his support. 🙂 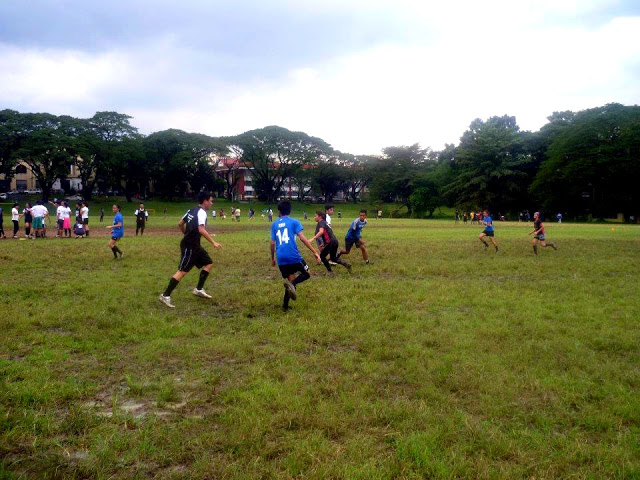 Wish there were more actions shots like this one. Can you see me running? The field was kind of wet, so we were having a hard time running around. See the puddles of water on the left portion of the pic? The colloidal solution (as per Big Bang Theory) could actually splat up to your face. So, eww, but you enjoy it. 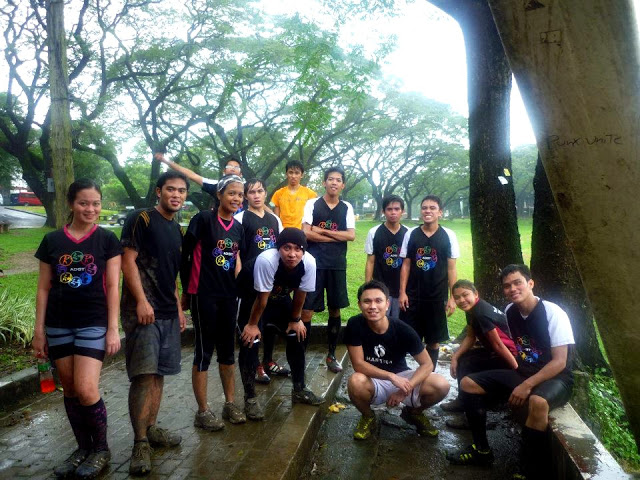 In between games. It rained! So it was during my first ever tourney that I have experienced my first ever wet Frisbee game! Enjoyed it. Though I kinda loathed the latter part when the rain started to wash away the sun block on my face. Some got into my eye and it stung a little. It was chilly!! And we ate lunch while we were wet. Haven’t had the chance to change because we have a game after that. 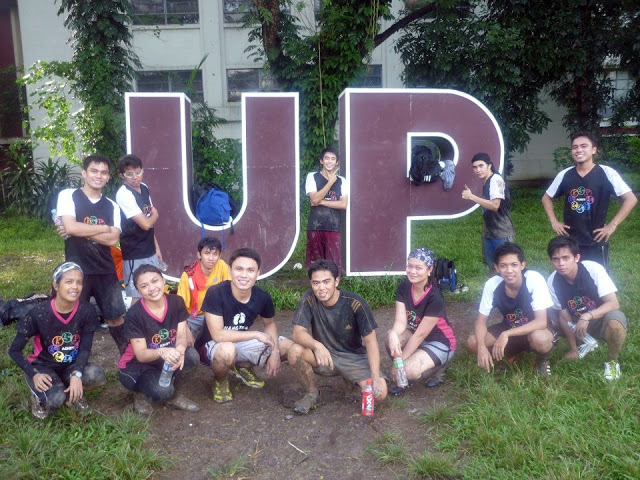 Two losses and we’re out. But, we thought it was a good thing since it was already four in the afternoon. (Sour graping isn’t our thing, finding some good, blessing-in-disguise thoughts is.) Mud all over and we smelled bad. Really bad. And for those who dived, woah, hands down! To MM, P and L. Whew, great dive, guys! 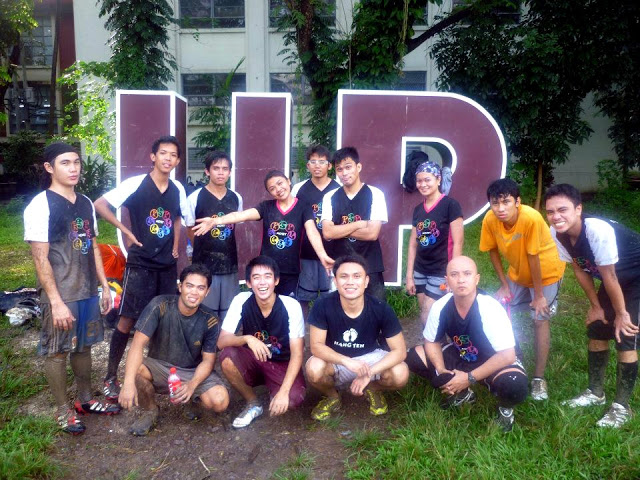 We definitely had FUN! And we are absolutely game to join the next tournament! Practice more. And for me, buy my Frisbee cleats. Maybe next year. And more sports clothes. Ahaha. #FeelingSporty 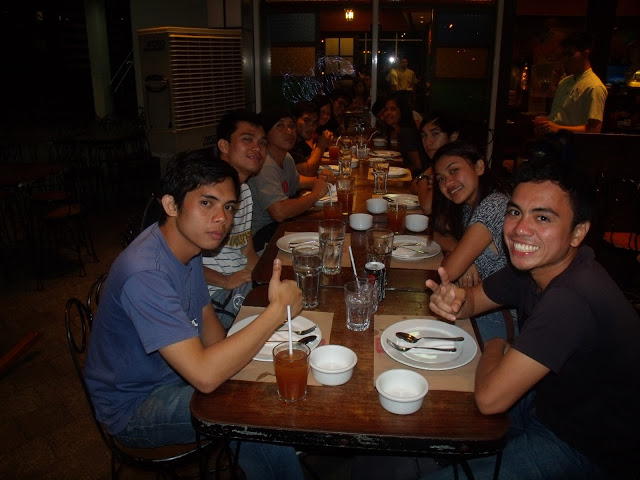 And what a better way to end this day with a sumptuous dinner. Ate at Kanin Club. Thanks A for the extra cash. 🙂 Loved everything they served especially the crispy dinuguan. Should make a food review about this resto. I was full. At the end of the day, the calorie jamboree was just sort of a cycle. I lost some, I gained more. Tragic story.
Boo Hoo! Just kiddin. One of the memorable days for 2011. Should make more in the upcoming year. I’m a quarter past my life, but I still get to do another first! 🙂 Life is always beautiful. Try new things. Have fun. Live.
*Picture credits go to A and moi. Thanks amuchoo 🙂 I’m glad the NCGs were there to revive the Frisbee Tuesdays and Thursdays. Gotta party with them this Thurs! 🙂

One thought on “My First Ever Ultimate Frisbee Tournament” 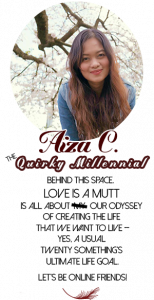 Let’s Live The Life We Dream Of Advertise on this spot